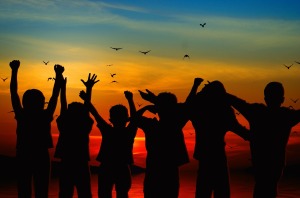 This is a rerun from the archives of 2 yrs ago. These days, I’m reliving those memories: grainy, zingy zatar–the stinky camel ride and my breathless laughter–glorious Dead Sea swim–Capernaum and the Sea of Galilee and eating a lunch of humus beside it–the ache of the Wailing Wall on Good Friday–the shine of one man’s eyes telling another “He is risen!”–the walk to Emmaus with sunshine, friends, songs, and a turtle. I will never be the same.

Last week I flew from Warsaw to Tel Aviv in order to spend Easter with my friends in Jerusalem. Sound exotic? Yes, it was. I’m still floating.But this is not a travel blog, though I dream of that. This is about an epiphany I’m still living with.

The plane was filled with Polish Jews and there was a beautiful, exquisite atmosphere with the families mingling and smiling and comparing notes. “We’re going for Passover in Jerusalem then rent a car and travel further. What? You too?” Polish Jews have suffered so much in this country, and I could feel the pulsating home-coming atmosphere and was so happy for them.

Wedged between two pleasant gentlemen, one wearing a kippah and editing his movie of a rabbinical school, I opened my Bible to Luke’s account of the resurrection. I wanted to enter into the story as much as possible in the next several days. I wanted to hear and see and smell what Jesus and His loved ones did. (As it turned out, it seemed that I could only see the same sky they did, because not much else is the same, but that’s ok. The journeys of the heart are what really change us, I think, not a physical pilgrimage.)

Luke says the women found the tomb empty and heard the angels say that Jesus was no longer dead, and then went back to tell “all the others” about it.

You know how women are when they get to be the first to tell someone their exciting news.

This was the best news that could ever happen, and to the disciples, Luke says it was idle tales.

Jesus had repeatedly confided in these men. He’d told them He would die and rise again. He’d done what He could to prepare them for the devastation they would feel, but it did not compute for them. Now this morning they were so crushed that they couldn’t let themselves believe what the women were saying.

Do you know how blankety-blank hard it is to sustain hope? It’s easier to write it off as nonsense and foolishness and tell yourself not to care anymore.

Mark says the disciples didn’t believe the women nor Cleopas and his friend from Emmaus who had walked and talked with Jesus that day. It’s pretty much impossible to believe news about a miracle when you watch all your hopes dangle on a bloody cross in an earthquake.

When everything you counted on is gone.

When you don’t even have the remains of what you loved.

But Peter ran, Luke noticed. John’s version includes himself in the running. Peter had loved Jesus the most boisterously, the most rashly, and he couldn’t believe what he’d just heard but he had to check, just in case, and the men couldn’t wait or walk calmly.

They ran, and I weep over their eagerness and their stunning bravery. They ran head-long into the situation that held the potential to break their hearts even more–if it’s possible to break a heart that’s already pulverized. There was no precedence for what Jesus did, and they had no proof of the women’s words being true.

Except they had Jesus’ words earlier, which is life and power in itself.

Wedged in a tight airplane seat, I tried to surreptitiously wipe my tears on my scarf because I didn’t want the men to get worried about me crying.(“No, no, I’m ok–I’m not scared of flying–everything’s ok!” I would have said.) But I can’t stop crying about it even now. There is maybe no other scene that speaks so powerfully to passion and longing and life than this one–of the men running toward what they couldn’t believe.

There are half a million things I hope for myself and those I love. Sometimes I get a tiny glimpse of how things could be. How a miracle would change things for them or me. How we could enter more fully into what we were created for.

But it feels so impossible, so far away, that I write it off as pish-posh. Or I believe the lie that I don’t deserve these miracles. Or I’m not one of the lucky ones and God is handing out miracles to others but forgot about me and my people for awhile .

And lies and fanciful tales don’t sustain and don’t give life. In fact, they starve me. Poison my system. Shut me down. Keep me from running.

With the power that woke Jesus from the dead, I want to run toward the things He wants to show me. Not wait around to see what happens. Not discount it as excitable women’s words.

The best thing that could happen had just happened, and Peter couldn’t believe it, but he still ran, and by the Lion’s mane,  I will too.

4 thoughts on “An Epiphany at Easter”