Yesterday our American group of 14 adults and children had a glorious time of celebrating Thanksgiving. Never mind that Thursday was a normal work day in Poland and none of our friends and neighbors know what the holiday is like. We still wanted to hang onto it, so we set aside Saturday afternoon and evening for that purpose.

As a mid-dinner activity, our hosts passed around a big brown bag. We were all to reach in without looking and pick out the first thing our fingers touched. Among the items was a candle, screwdriver, spool of twine, and mine was a battery. Then we all took turns saying something we’re thankful for, connected to the object in our hand.

I said that I’ve been thinking a lot of a year ago, and how sick I was, and after the surgery, my battery was completely out of power, but now it’s pretty much like new, and I’m so grateful.

I don’t do well with improv so of course afterward I thought of lots more I could have said.

Like how grateful I am for the previous day that recharged my batteries. Can I tell you about it?

First, I tidied up the house and laundry, and started preparing the stuffing I was making for the next day’s Thanksgiving dinner. Then Jewel and I went to a friend’s place in the country to find greenery. There were so many beautiful colors and textures of pine that we could hardly stop, and loaded arm loads of it into the car. Then we went to another friend’s place to pick up pine cones from the forest floor. The husband and wife came out to the car to welcome us, and I showed my bag I’d brought to put the pine cones in. The mom said something to the young boy who ran down the hill and came back up with a feed sack full of pine cones. So all I had to do was put them by handfuls into my bag.

“Come in and have tea with us, please? You haven’t been here for two months!”

We couldn’t say no. The youngest girl put out cups and saucers on the coffee table and the mom brewed her winter tea: Lipton with cinnamon, cloves, and lemon slices. As we drank, we chatted (all in Polish) and found out they were doing homework for their foster care classes.

“I wrote a story for my assignment. Can I read it to you?”

We said yes please, but please explain it to us in simpler Polish. “Oh, it will be simple, because it was written for three year olds.”

And it was, and it was a huge battery recharge, sipping sweet, spicy tea, listening to a new darling story about a little rabbit. Its burrow was broken and its mom was sick so the mice took it to their house, and wrapped it in cozy blankets and fed it hot soup. They gave the rabbit a mirror so that he could see someone who looked like himself.  awwww!

Back home again, we finalized supper plans for 4 guests, and I put together Greek marinated chicken which I’d never done before and finished the stuffing preps and brought in the armloads of greenery.

With Messiah coming from the speakers, I arranged greenery and candles and stars on the coffee table and window sill. I couldn’t believe how the time flew as I deliberated colors and arrangements.

Our friends came at 6:30, the meal was a success, and we played games and talked and laughed til late. The dancing candlelight in the background gave me so much joy on top of everything else.

At the end, I was tired, but my battery was completely recharged. It had been a hard week. I’d had a stomach bug all week and couldn’t eat much and lost considerable sleep because I was fretting about things I couldn’t control. I’d cleared this day’s plans so I could stay home and do as little as possible. But despite those changed plans, in one day, so much energy came surging back.

Recharged batteries takes a certain level of self-awareness because it takes place when we don’t consciously make it happen. What are you doing when time is immaterial to you? When do you feel yourself relaxing and breathing deeper and slower? What happens to make you start laughing or humming to yourself?

For me, it happens when I

God made us so intricately, with so many layers, and I don’t know how it works that one layer affects so many others. I only know that He is very, very good to me in giving me so many ways that help recharge my battery and power up for the new week. 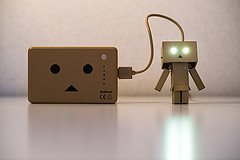