For something different, I’m starting a little series about the artwork I have in my house and the stories that go with each piece.

Four years ago, I was a student at Faith Builders and figuring out how to live in the US again. I flew here with just enough belongings to settle into a small dorm room and be a student. I didn’t have an envelope when I wanted to send off an application and I didn’t have a jar or rubber band to make kefir in my dorm room. (I’d brought the grains though: priorities.)

Apparently customs officials had riffled through my suitcases and found what seemed to be a large nut, and threw it away, but it was actually a dear little carved nativity scene that had been gifted to me, and I still miss it. I’m not that attached to stuff, but it still felt like a loss. The biggest loss was my rich connections with people who now lived an ocean away.

It was a topsy-turvy season, shattering and bewildering. Many, many good things happened, but mostly it was hard.  Beautiful, loving people surrounded me but I felt like my heart was mostly vacuum, hollowed out, shivering. There were weeks when I cried every day.

About eight months into re-entry, we had a group activity where we divided into teams of four. Using poster paints and our fingers, each team replicated their choice of painting from the Impressionist masters. Our team chose Monet’s Sunset in Venice: 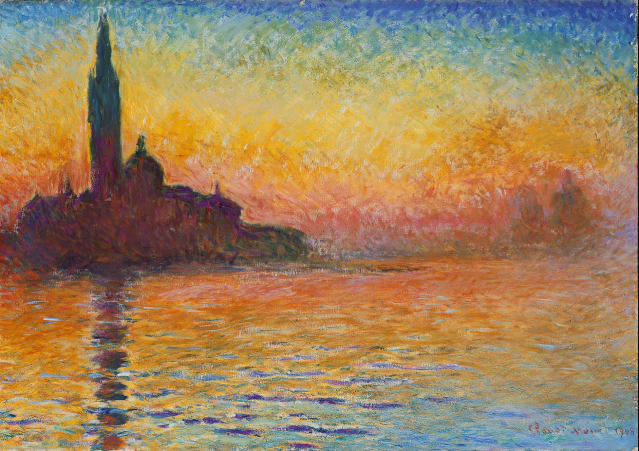 We started dabbing colors onto the margin of the big poster paper.

This is what some of my team mates said, but they went to it as if they’d done it all their lives. They studied the original, dipped their finger tips in paint, and dabbed it carefully. I flitted around, sketching briefly, maybe mixing some colors.

I don’t remember which part I did, but my predominate memory is that I cheered and cheered for how their success surprised them, and my fingers and palms were smeared with great colors, and I started breathing deeper and easier than I had for a long, long time.

We ended up with this: 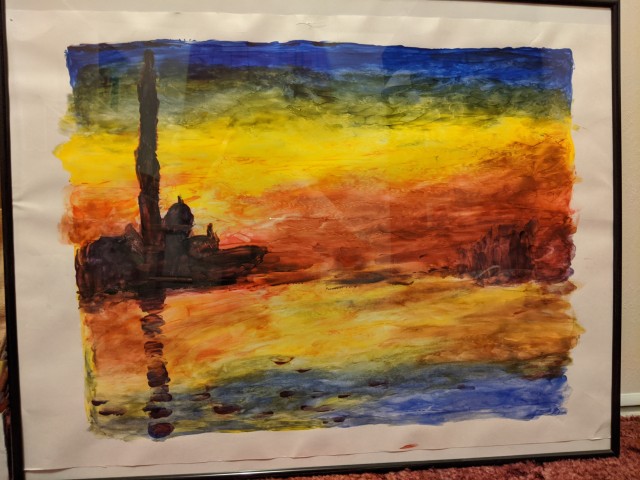 My favorite feature is the rippling reflection of the spire:

We left it to dry overnight, and I felt like a new person.

All the teams displayed their paintings in the hall for several months, then threw them away, but I couldn’t part with ours. I found a frame for it, and I don’t have wall space for it, so it’s propped against the wall in my hall. Maybe sometime it’ll find its way to the dumpster, but not yet.

I wonder if I’m more attached to stuff than I thought.

13 thoughts on “Fingerpaints of Venice”

Your turn to say something! Cancel reply